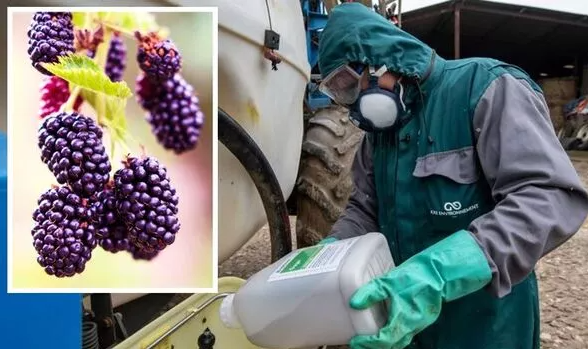 Figures show fruits grown in the EU have seen pesticide use rise by 11 percent, up to 29 percent from 18 percent in 2011. The news comes as member states should have limited their use in favour of alternatives according to a study by an NGO – PAN Europe – published on Tuesday. The study was based on samples taken from over 97,000 pieces of fresh fruit including peaches, strawberries, cherries, apples and blackberries.

Since 2011, EU member states were required to move away from chemical pesticides to other synthetic pesticides, herbicides, fungicides and insecticides, whose authorisation is approved by European Union standards.

On national levels, the authorisation must be approved by comparative evaluation and standards of such alternative products.

The worse offending fruit was blackberries, with traces of chemicals found on 51 percent of samples taken and tested.

The results of the study have undermined plans by Brussels to reduce the use of such chemicals by half by the year 2030.

EU officials set the plan in 2020, setting the target which has since increased rather than the adverse.

Salomé Roynel, of PAN Europe, said: “If there are no strong measures, we do not see how this objective could be respected.”

Ms Roynel stated the EU Commission has the power to call on the countries failing to meet the standards to improve.

The NGO has also called on various chemicals to banned outright.

Tebuconazole, a fungicide toxic to reproduction, has been found on cherries produced in 2019, with countries such as Spain seeing their use.

Intended to destroy living organisms deemed harmful, pesticides are likely to have effects on human health, increasing the risk of fertility problems or even triggering certain diseases such as Parkinson’s and cancer.

In 2021, an expert report by the French Institute of Health and Medical Research (Inserm) concluded that there was “a strong presumption of a link between exposure to pesticides in the mother during pregnancy or in the child and the risk of certain cancers (leukemia, central nervous system tumours).”

The use of chemicals is not limited to just fruit.

Vegetables are also seeing pesticides being used in their production, albeit, on much lower levels compared to fruit.

In such cases, around 13 percent of samples saw traces of chemicals.

The most affected greens include celery, celeriac and kale, with 31 percent of samples showing traces of chemicals.

EU Member States have been legally required since 2011 to phase out 55 pesticides identified as particularly harmful.

However, their presence in food has increased dramatically over the last ten years as is shown in a report launched today.

In 2009, Regulation (EC) No. 1107/2009 introduced a new category of active substances known as the Candidates for Substitution.

This provision was meant to identify the most harmful approved active substances for humans and the environment and to substitute them with less harmful chemical and non chemical alternatives to finally drive their phase-out.

“Now the Farm to Fork and Biodiversity Strategies propose to reduce their use by 50 percent in 2030.

“But if the Member States had seriously pursued the legislated phase-out target set by the Pesticide Regulation, this Farm to Fork goal would already have been achieved today.”

She ended: “These chemicals should disappear from our food.

“But instead, we observe a dramatic increase in exposure to these most toxic substances over the last ten years.

“The proportion of fruits and vegetables contaminated with these pesticides continues to rise.

“Often the food shows multiple residues of two or more of these toxic substances at the same time.

“This clearly demonstrates that the substitution rules have never been implemented by the Member States and that they have failed in their responsibility to protect consumers.

“This is not just a political aspiration; it is the law since 2011 and it is about time for the Member States to act on it”.